With life just begun, my sleeping new son
Has eyes that roll back in his head
They flutter and dart
He slows down his heart
And pictures a world past his bed.
It’s hard to believe as I watch you breathe –

Your mind drifts and weaves
When you dream. 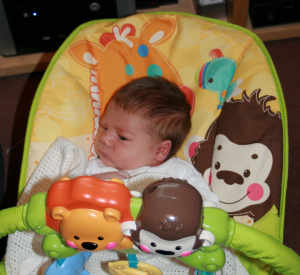 Sleeper Jr, in a rare moment of both wakefulness and calm.

On June 4th, the little chap pictured in the sonogram below finally decided to show up, over a week late. It’s been an interesting couple of weeks, in more than one sense of the word. I won’t talk about the hospital experience too much because I’ve been told by two independent healthcare workers involved in little’un’s care that I should be making a formal complaint about it. So more on that later. For now though it’s back to the office on Monday. Hopefully there I can catch up on some rest!

This work is licensed under a Creative Commons Attribution-NonCommercial-NoDerivatives 4.0 International License.

1 Response to When You Dream

This site uses Akismet to reduce spam. Learn how your comment data is processed.