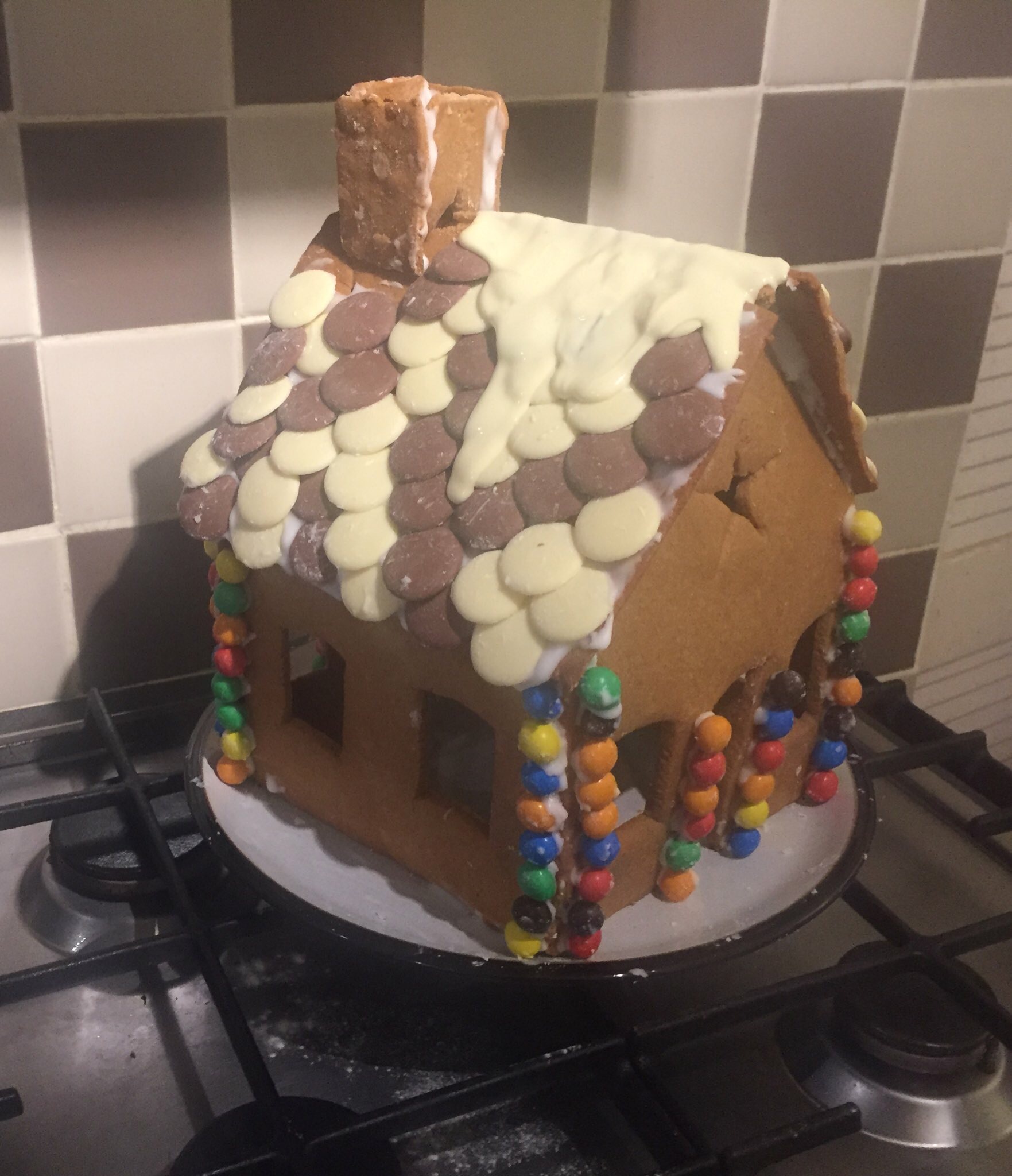 Don’t you wish you were this awesome?

Oh, it’s a yum-yummy world made for sweethearts
Take a walk with your favorite girl
It’s a sugar date, what if spring is late
In winter it’s a marshmallow world

Some of you may be aware that cookin’ runs in the family. And because this is Christmas, and there’s a recipe that gets trotted out in the Sleeper household at this time every year, which was handed down to me down the ages, partially embellished from a recipe created by a football club majority shareholder. I give you:

To create an object of such awesomnity, you’ll need: 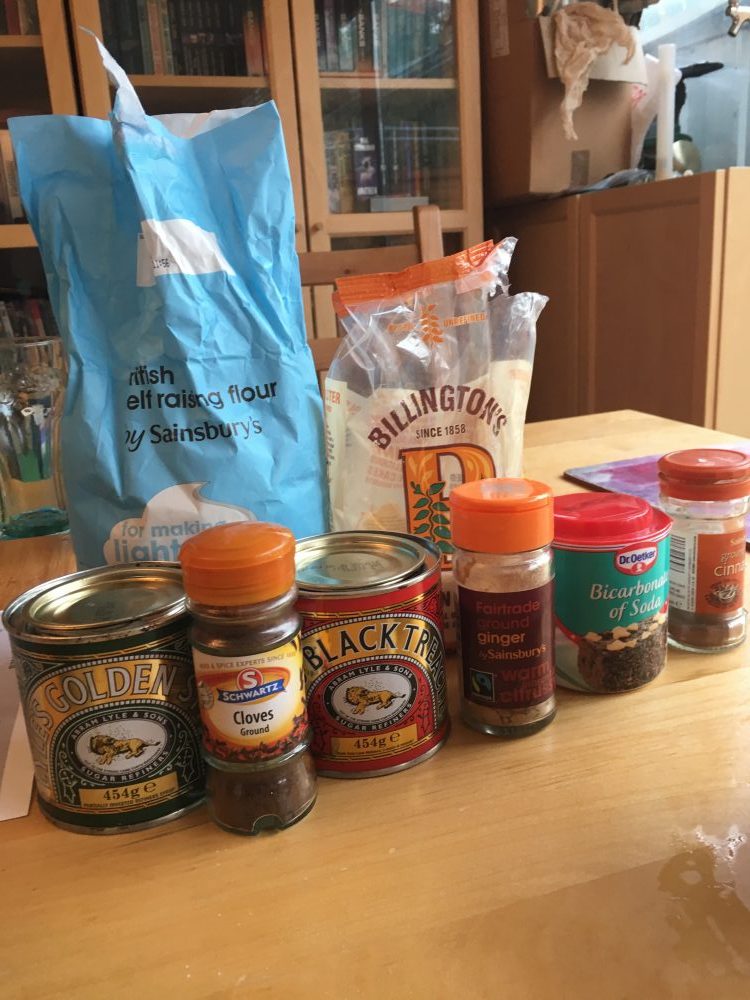 A four-year-old (optional)
A gingerbread house template. I used this one.
As many baking trays as you can lay your hands on
Baking parchment
A rolling pin. If you don’t have one, use Grandma Sleeper’s Patent-Pending Emergency Rolling Pin Substitute, as shown: 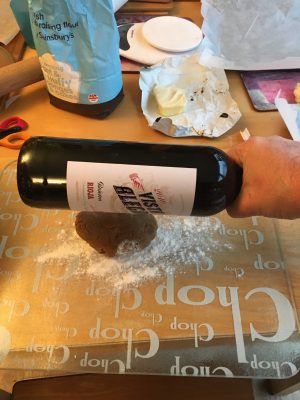 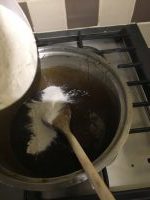 Sling the liquid ingredients into a saucepan with the spices and bring to the boil. Once they’ve reached boiling point, turn off the heat and stir in the butter. Once that’s melted, gradually add the flour and baking soda a little at a time until you have  something approximating a dough.

Shove a lid on the pan and leave it somewhere for half an hour, or alternatively, as long as it takes to walk down the road to the shop to buy mince pies.

Preheat the oven to 180 °C. Roll the dough to about 3mm thick, using Grandma’s rolling pin substitute if needed, out onto a well-floured surface, and cut it according to your templates.  Once you’ve got all the bits rolled out, bake for 12 minutes. 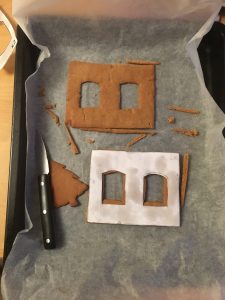 The instant that you remove the gingerbread from the oven, take your templates and trim off the edges from the hot gingerbread with a sharp knife so that they once again match the shape of the paper. Leave them to cool on the trays for a while. Don’t eat the offcuts, and don’t allow the four-year-old anywhere near them.

While you’re waiting for the gingerbread to cool, mix the icing sugar with water so that it’s about the consistency of the middle of a Creme egg (which is to say almost, but not entirely solid). Wonder why it’s December 23rd and the shop already had huge hoppers full of Creme Eggs even though it’s not even Christmas yet.

Assemble the four walls of the house on a plate, using copious quantities of your icing sugar glue. Apply more glue to the top edges of the standing walls, then attempt to add each of the roof pieces. Fail. 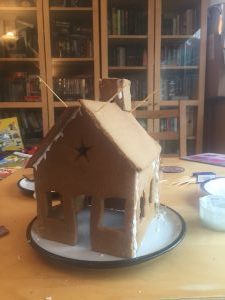 Note the temporary presence of cocktail sticks while the cement, sorry, icing dries

Inevitably you’ll find that they slide down, so scramble through your cupboard and find some cocktail sticks. Skewer each of the roof pieces in place until the icing dries, and hope that it’s before you need to decorate the top of the house.

Now, take your four-year-old, and help them stick the chocolate buttons onto the roof. Attempt to disrupt their attempt to alternate the colours by sneaking an extra button in every now and then, and try to stop them scoffing them all before you know if there are enough to cover the roof.

Similarly decorate the sides of the house with the M&Ms. For the most part you’ll spend more time sticking them back on after they fall off than you will adding new ones on, but eventually you’ll reach a point of equilibrium.

Finally, fill the gaps at the top where the roof meets with the offcuts you made after taking the gingerbread out of the oven. If your four-year-old is like mine and has scoffed them all, despite your earlier protestations, instead just hope for the best. Melt the white chocolate and pour it over the top to cover up the horrible gap that you have between the roof pieces. Hope it looks enough like snow.

Finally, convince your four-year-old to hold off from wanting to eat it for long enough that you can take a picture for Grandma Sleeper.

Devour before the entire structure collapses under the weight of chocolate.

This work is licensed under a Creative Commons Attribution-NonCommercial-NoDerivatives 4.0 International License.

This site uses Akismet to reduce spam. Learn how your comment data is processed.